For years LatAm INVESTOR has focused on the Pacific Alliance countries of Mexico, Colombia, Peru and Chile. They’ve rewarded our faith and are the strongest performing major economies in the region. With investors running scared, now is a great time to invest in these economies.

In a region full of talking shops and forums – there were nine at the last count – the Pacific Alliance has stood out by getting things done.

It started out as a trade pact in 2011 and has grown stronger every year. By cutting tariffs on 92% of goods traded between member countries it will boost business between them. That also makes it easier for regional supply chains to form, creating economies of scale and larger markets. Another exciting development has been the move to cut visa requirements, helping to boost intra-member business travel and tourism.

But the member countries aren’t stopping there. The most exciting project is to integrate their capital markets. The Mercado Integrado LatinoAmericano (Mila) is an ambitious attempt to link the individual stock markets, which, with the exception of Mexico, are small and illiquid by UK standards. Over the years we’ve had several interviews with Juan Pablo Córdoba, head of the Colombian stock exchange and one of the architects of the Mila project. In fact he was recently in the UK, explaining Mila to institutional investors at the London Stock Exchange. As he readily admits, Mila is a long way from being finished. Trading volumes on the platform are still low, but Córdoba is convinced that the market will take off. “When we started there was a debate about if it could work or not. Now the conversation has moved onto how fast and how big.”

The Pacific Alliance passes the test

The arrival of a new, powerful trade block has made waves in the region. The recent Canning House Conference in London was enlivened by ad-hoc contributions from the non-member country ambassadors who disputed the panel’s pro-Pacific Alliance stance. Indeed, despite protestations to the contrary, many see the Alliance as a diplomatic manoeuvre to create a counterweight to Brazil. But perhaps the most damning claim is that the Pacific Alliance is a marketing trick. As I’ve mentioned before some analysts feel that the Alliance lacks the intra-trade or judicial authority, to justify talking about it as an economic block.

There is a measure of truth in all of those points but for investors like us it really doesn’t matter. The fact is the Pacific Alliance has withstood the ‘Alistair Cook test’. The region has been hit by falling commodity prices, tighter US monetary policy and an emerging market sell off. Some countries like Brazil and Venezuela have suffered painfully, with both facing their worst recessions for a generation. Meanwhile the Pacific Alliance countries have stood up to the challenge, with economic growth outstripping their larger regional rivals. 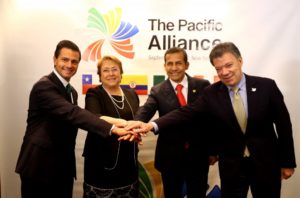 The presidents of the four Pacific Alliance members

The main reason for the resilience of the ‘Andean 3’ – Peru, Chile and Colombia – is that they were in great macroeconomic shape going into the slowdown. That’s allowed them to use counter-cyclical measures to keep growth going despite the fact that the prices of their main exports have plummeted. It also helps that they have floating exchange rates, which have absorbed a lot of the pressure and helped make locally-produced goods more competitive. As for Mexico, it’s benefiting from the US recovery, being a major manufacturer for the world’s biggest economy.

But the key point is that they are well-managed economies. It doesn’t take much insight to see that many Latin American countries have lots of economic potential. But, given the region’s poor economic track record in the two centuries since independence, investors would be right to worry if it would achieve this potential. As the old joke goes: “Brazil is the country of the future… and always will be.”

Well now the Pacific Alliance has shown it can survive the ‘commodity crunch’ and tighter US monetary policy, investors can be more optimistic about its members finally realising their potential. We’ve written in-depth reports on the investment opportunities in Colombia, Peru , Chile and Mexico that offer a good starting point for following up on the Pacific Alliance members.