The Federal Reserve raises rates. Those five words should strike fear into any Latin American investor’s heart. After all, there are plenty of painful episodes in living memory when a US rate rise spelt disaster for the region.When Fed Chairman Paul Volker brought in eye-watering rates in 1979 to crush inflation, it was the trigger for Latin America’s ‘lost decade’. Then in 1994, another US rate rise sparked the ‘Tequila Crisis’. So with Latin America’s growth already struggling, you can see why analysts are worried about the impact of this latest rise.

But the pessimists are wrong. One or two of the badly-managed LatAm economies will suffer but for the rest this decision marks the beginning of an upturn.

Over the past year or so, LatAm INVESTOR has interviewed central bank governors across Latin America. And in every meeting we asked about the looming prospect of US tightening monetary policy. They all recognised it as a powerful factor – one that they couldn’t completely counteract through their own policies – but they were very sanguine about it. In fact, some even welcomed it.

Obviously central bank governors can be keen to talk up their economies – it doesn’t look great if they tell journalists that they’ve lost control and it’s all going to hell in a hand basket. Yet their responses to our questions on tighter policy are very revealing.

When LatAm INVESTOR spoke to Rodrigo Vergara, Governor of the Central Bank of Chile, he pointed out that it was all about managing expectations. 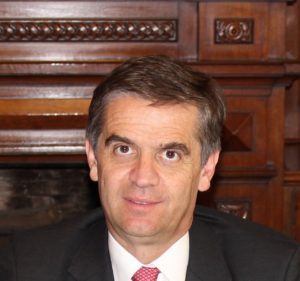 “With regards to the tightening of US monetary policy I think that a lot of it is already priced by the market. The Fed has been very clear about what we can expect… So if Fed actions more or less follow the expectations that have been laid out then I don’t expect Chile to be in much difficulty. Of course problems could arise if the US tightens much more quickly than expected. But even this could only be a short-term.”

Say what you want about the Fed but they certainly let us know this was coming. Wednesday’s rise was very predictable so investors, policymakers and central bankers have had time to adjust.

It’s happening for the right reasons

Adolfo Meisel , Co-Director of the Central Bank of Colombia, told LatAm INVESTOR that he felt that with all the fear about rising rates, people were forgetting that they were going up for a good reason.

“If the US does have a big change and decide to tighten policy, it will coincide with their economy improving. As they are our main trading partner that would also be a positive for us.”

The US recovery isn’t just a good story for Colombia, all of Latin America should benefit, especially Mexico, Central America and the Caribbean.

Latin America is in a much stronger position now

Back in the 80s and the 90s Latin American countries were loaded up with dollar-denominated debt when US rates rose. That’s why the Fed decision hit them so hard. This time around they don’t just have lower debt levels, they also have a higher proportion of local borrowing, which is easier to service in times like these.

It’s something that Agustin Carstens, Governor of the Central Bank of Mexico, pointed out to LatAm INVESTOR.

“Investors have tended to differentiate between those economies with strong fundamentals and those with weaker positions. Mexico has adopted sound and credible macroeconomic policies and strengthened their economic fundamentals during the past years. And this has helped to create an environment of macroeconomic stability that has improved investors’ confidence. All of which, has significantly reduced the vulnerability to negative external shocks.”

Another positive change is that the main LatAm economies have floating exchange rates as opposed to fixed rates that come under pressure when the dollar rises. In past crises Latin American countries burned through billions of dollars of reserves trying to defend unrealistic currency valuations. Now most don’t and that’s something that Chile’s Vergara was keen to stress when he met with LatAm INVESTOR.

“It is important to bear in mind that the policy framework in Chile contemplates a floating exchange rate, which allows for faster resource allocation, which we believe is one of our strengths. The Chilean peso acts as a shock absorber and it has already depreciated significantly in the last year.”

Of course not everything in Latin America’s garden is rosy. Even the countries with good fundamentals have some issues. But part of its new strength is that these economies are better managed. For example, Julio Velarde, Governor of the Central Reserve Bank of Peru, was at pains to explain to me how the country is slowly managing the dollar debt exposure that some of its companies have.

“In our case a currency depreciation, particularly if it is large and sudden, poses considerable risks; namely, households and firms with currency mismatches in their balance sheets may experience solvency problems triggered by a sudden depreciation. In order to mitigate these risks, the BCRP has implemented macro-prudential policies to reduce banks’ reliance on foreign currency funding and curb excessive credit expansion, particularly in exposed segments like car and mortgage loans.”

A generation of policymakers and technocrats that grew up during the crises of the 80s and 90s seems determined to not to repeat the same mistakes.

Far from being the deathknell for Latin America the Fed’s decision highlights how far the region has come. This new found resilience is another great reason to be invested in Latin America.